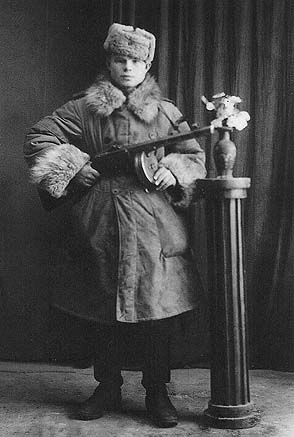 The Great Patriotic War against Faschist Germany and Imperialist Japan in 1941-1945 was a heavy ordeal for nations of our country and our army. About 57 years have passed since Soviet victory in Manchurian offensive operation which I took part in. Capitulation of the last agressor of World War II - Imperialist Japan - was a result of that victory.

Some people guess it was a little walk of our army in Manchuria. It is quite far from the truth. Of course, there was not too much blood. We cracked down on Japanese with our military machinery and great experience gained in battles against Nazi Germany. We incured a losses in Manchuria - many wounded and dead. My regiment went about 600 km for 12 days - we fought constantly against Japanese.

I was called up for military service when I was 17. I underwent military training in 23th district marksman school of Far Eastern Front which was located in Shkotovo village of Primorski territory.

After occupation of Manchuria in the thirties Japanese Kwantung army began to prepare for a war with Soviet Union. They suggest that war as offensive only, some kind of Far Eastern Blitzkrieg. Plans of this agression were invariable until German failure on Eastern Front. It were a disturbing times, we had expected Japanese agression day after day. Japanese had established many provocations on our border. Because of battle alarms we had often arranged quick marches on 50-60 km. But after Red Army victories at Moscow, Stalingrad and Kursk they had stopped their attempts.

Now it was our turn. I was a sergeant of 607th rifle regiment, 231th rifle division, 59th rifle corps. As squad leader I took part in famous breakthrough of 1st Redcolors Army of 1st Far Eastern Front throgh mountain taiga to the Harbin.

I remember meeting before our attack on August 8th 1945 quite well.

We were informed that at 1 a.m. on August 9th army will begin an offensive operation to drive Japanese invaders out of Manchuria and liberate Chinese fraternal people. Our morale was very high. All soldiers, sergeants and officers took an oath to perform a battle task and avenge Japanese for their crimes against Soviet people.

On August 8th in the evening we were on our positions fully-equipped. At 1 p.m. on August 9th divisions of 1st Redcolors Army started their moving to Manchuria territory from Pogranichnaya outpost. It was raining cats and dogs. There were many lightnings. Soldiers joked it was an 'artillery preparation'. I want to say "thanks" to our glorious border guards. They knew this territory very good. It helped them to steal up to Japanese outposts and wipe them out without casualties. It was a hard test - 1st Redcolors Army went 20 km through mountain taiga. We had advanced through virgin forest - mighty oak-wood, cedars, pines, limes with liana, wild grapes and thorny bushes. Bushes were everywhere. This "barbed wire" of nature could literally disrobe inexperienced man in a few minutes and maim a body. Now you can imagine how hard our way was.

The offensive zone of 1st Redcolors Army was considered impassable for troops and vehicles. But Soviet warriors had done it and unexpectedly turned out in depth of Japanese fortified areas. Taiga breakthrough was a big surprise for enemy. Japanese fleed in all directions and surrendered to us later. In the third day of offensive operation our commanders had read out to us the short order of 1st Redcolors Army's Commander Twice Hero of Soviet Union Colonel General Beloborodov: "I thank warriors of 1st Redcolors Army for successful accomplishment of battle task". I'll never forget it. We were proud of our great Motherland and its glorious army.

I remember my first baptism of fire. It was under Li Shu Chuen city. Our rifle company under command of senior lieutenant Yaschenkov went in head picket of 231th rifle division. There were three soldiers in advance of company in patrol. It was about 4 a.m. Our company commander was resting in carriage. At a distance of few kilometres from the city we suddenly ran upon a big group of Japanese suicide soldiers. Their position was on a little hill with bushes. We heard a shout of one of survivors from head patrol: "They're slaughtering us!". Our commander gave us an order to deploy and dig in.

It was dark around. We began exchange of fire - fire of machineguns and rifles. Our commander was an experienced and brave officer. He gave us an order to pelt Japanese's position with F-1 grenades. It was sucessful because of our immediate proximity to them. Many Japanese soldiers were killed, others fleed to mountains. We incured a losses too. My friends from Khabarovsk Sasha Kupavin and Fedor Andreev (commander of machinegun squad) had fallen in that battle. They had ran upon Japanese trench in the dark. These guys were 20 as myself.

Main thing I remember about that war most of all was our persistent moving. Forward, only forward! We constantly wanted to sleep. We could eaten hot food only in seventh day of our offensive during a little rest after seizure of Ling Kou city. We took that city almost without striking a blow. I've remembered Ling Kou especially well. 3000 Japanese troops captured it again after our leaving. There were hospital and some other units in Ling Kou. We had formed special unit for recapturing operation. They dashed back to the city on self-propelled guns rapidly.

It was a horrific picture. 76mm cannon battery fought to the last drop of blood at one of the streets. They all died. But Japanese incured big losses too. I can't describe what Japanese fanatics did with our captured hospital. Near plucked medical tents with red cross I saw a tortured female captain medical officer lying on the ground with a straw wisp in her ripped stomach. There were blood-stained body parts around. All wounded were brutally hacked to death. Medical officers were killed bestially. Our unit went pass that place in silence. We didn't take prisoners when we had run down Japanese.

At that time we didn't know what the future may hold. I walked in the Manchurian mud, shaded food, tobacco and weight of backpacks with my brothers in arms, took part in attacks, lost friends but I always was sure about our victory. I saw many frightful things - T-34 explosed by Japanese suicide soldiers under Mu Dan Chan, pillboxes with fanatics chained themselves to machinegun, friendly fire from our airforce, convoy of 10 000 Japanese prisoners to Grodekovo, rejoicing of Chinese. And finally - Victory!

My life after war was good. I had continued to serve in army as political deputy squad leader after officer awarding. I graduated from Historical Faculty of Khabarovsk Teachers' Training Institute. After transfer to the reserve I had worked senior instructor in organistion department of Khabarovsk territory executive committee.

Soon I met Alexandra. She was a graduating student from Pharmaceutical technical secondary school. She has become my wife and my best faithful friend. We've created the close-knit family. We have two sons. The elder son've followed in his father's footsteps - he's a colonel of Ministry of the Interior of Russian Federation. The younger son is a teacher.

Now I meet my combat friends snipers, brother-soldiers at times. We have many things to remember together.

We would walk around and flaunt our bravery, our disregard of threats to life. But it was not complacency or a manifestation of immaturity. We consciously went to fight and die for our country. Every one of us was a volunteer and realized when leaving the ship, what future was in store for us...

On 16 April 1945 at the Seelow Heights I had an occasion to kill a Hitlerite Tiger Panzer. The two tanks faced head-on at the road intersection. I was a gunner, and first to fire an armor-piercing round and hit the “Tiger” under its turret. The heaviest armored “hood” bounced off like a light ball.

Then there was some lack of clarity. I knew that there would be enemy panzers that I had to knock out, to move forward and do everything to win. I remember how I knocked out an enemy self-propelled gun: I hit it at short range... We liberated the towns of Volokhov, Karachev and Bryansk. When Bryansk was liberated, we were withdrawn for reformation to the Bryansk forests where we stayed a very long time.

In the battle of Prokhorovka our corps, in the beginning, was in the second echelon supporting the engagement of other corps and only then did we move forward. The distance between tanks was no more than one hundred meters, the only thing they could do was fidgeting, no maneuvering. It was not war, but tank slaughter. They crawled and fired. Everything was on fire. An inexpressible stench was in the air of the battlefield. Everything was so covered with smoke, dust and fire that it seemed that twilight had fallen. The air force bombed all. Tanks and vehicles were on fire. Communications did not work.

I went out scouting so many times and every time under my own name. I had always been taught: “Whenever asked give your own name and tell where you lived, don’t fib, otherwise, you’ll get confused and will be caught!” For our deep-cover agents really sophisticated cover stories were invented, but this was not my case. I told them about myself. They started taking me to people’s apartments where residents still lived. The people would answer: “Yes, we know him, saw him around!” The “grandpa” “recognized” me right away: “Yes, he’s mine; I’ve sent him to fetch some kindling… what kept you so long?” This is exactly what he said.

I remember when we rushed towards Konigsberg; our battalion travelled in a marching column on a highway. There was a slope on one side and a swampy depression on the other, and suddenly we ran into an ambush. German artillery pieces knocked out the lead and last vehicles from the mound, but we began to disperse and fire back. I rolled to the right, and then my tank was pierced through, but because of the short range all the crew members survived.... Then out of ten vehicles, I think, we lost four. When we seized the German positions we found that the gunners were chained to their guns...

In the afternoon my platoon, consisting of five T-26 tanks, entered the  village, and we split up. I went with three tanks along the main street,  while my deputy platoon commander Tereshchenko went with two tanks  along a parallel street. And then it began. They fired at us from  everywhere. One of our vehicles was burned, and the other was only  knocked down, but the crew was killed. Somehow I managed to make it on  foot to the tank of Tereshchenko and pick up from his dead, bloodstained  hands a map case with the map where the coordinates of the German guns  were plotted... God protected us; three tanks left the village and went  back to our lines.

At dawn we finally got to the intended region, mined the main road and  laid an ambush. The frost got severer, our hands were almost frozen.  Suddenly we heard the roar of approaching enemy cars and opened fire. We  killed four Fascist, took the staff papers out of a passenger car and  retreated. Soon motorcycles hurried to the assault place and opened a  random fire at the forest. When we were ready to fall back our comrade  Vanya Ochotnikov came and shouted that Germans were on the opening.